The biggest new feature is the power model analysis tool. This looks at your power data and estimates how strong you are using the critical power model. This includes an FTP estimate. 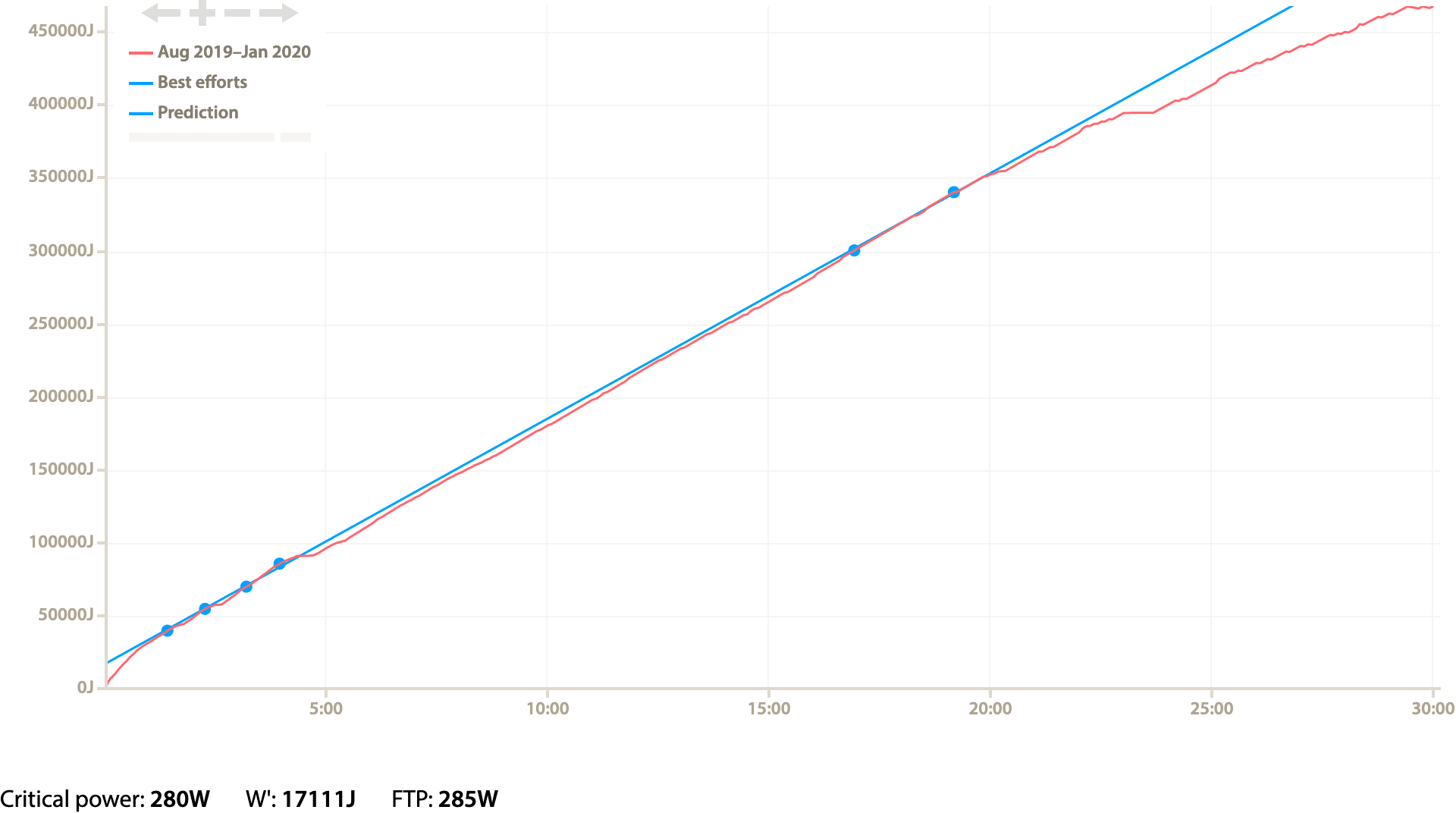 Precisely what this shows is a bit complicated. The most important part is the numbers shown underneath. If you’re not interested in any theory, then note that this estimates your FTP, and there’s something underneath that predicts what power you should be able to sustain for any duration longer than a minute or two.

If you are interested in some theory, then according to the critical power model, you can sustain a certain power output indefinitely (critical power, CP) and you also have a certain amount of additional energy that can be used above the critical power (W’). As an equation, the maximum power that can be sustained for a duration is CP + W’ / time. For example, using the numbers in the screenshot, the maximum power that could be sustained for ten minutes is 280 + 17111 / 600 = 309W. There’s something underneath this chart on the power model page so you don’t need to do any maths yourself.

The orange line is the maximum power curve for the selected period, but shown as energy (joules) rather than average power (watts) (you might remember from high school physics that energy is power multiplied by time.) The critical power model says that a straight line that indicates the maximum power output can be drawn on this chart. The blue points are the best efforts that this tool has identified from your riding, and the blue line is the prediction, which represents CP and W’.

Is this accurate? It depends on the data. The most important thing to be aware of is that its estimates are based on efforts you have done, so it requires maximal efforts for multiple durations to give accurate predictions. W’ in particular can vary widely depending on the data. If your data contains hard short efforts but no equivalently hard long efforts, W’ might be overestimated significantly. There is more of an explanation for how it behaves on the power model page. One nice thing is that even with non-ideal data it rarely overestimates FTP by much.

Some credit for this goes to Mark Phillips, who shared a spreadsheet with me that inspired the approach this tool uses, and who also sent me a bunch of links. 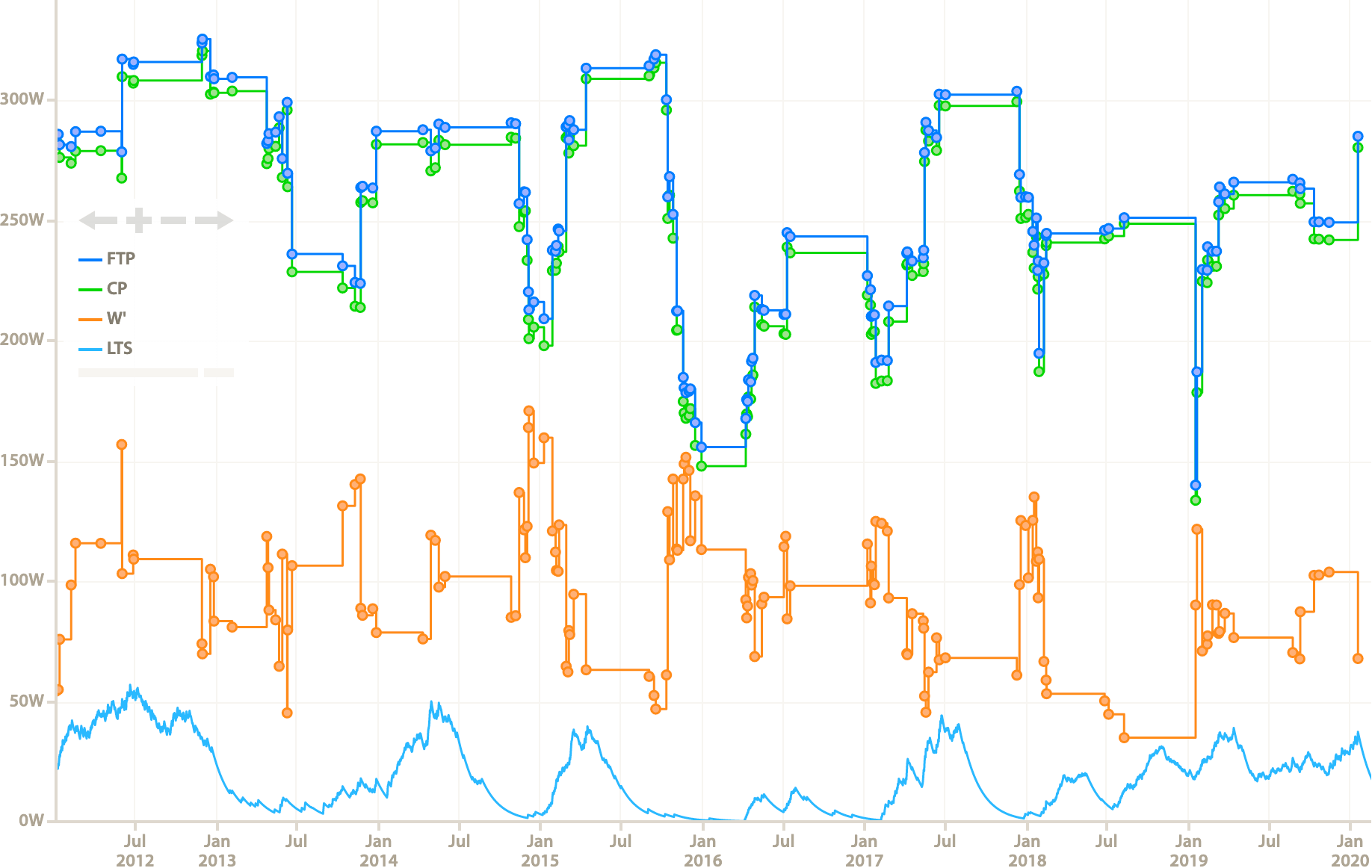 One of the other charts on the power model page shows how the estimates for critical power, W’ and FTP have changed over your entire riding history. This particular chart shows the history of someone whose riding hasn’t been regular over the years, and the predicted FTP varies accordingly.

There are a few other parts to the power model analysis tool. There’s a “Veloclinic plot”, plus a few calculators to do different things which might be useful. I’m not sure how intuitive all of this is or how clear the explanations are.

The main ride chart has seen some changes:

It’s now possible to adjust FTP for indoor rides, as many people find their indoor FTP is lower than when they’re riding on the road. This works with a simple percentage scale factor (i.e., if your FTP is 300W and you set it to 95%, indoor rides will have an FTP of 285W), which is simpler than maintaining a separate FTP history for indoor rides, but not as flexible. Adjusting the scale factor causes all existing indoor rides to be updated to use the new FTP. If you later decide you don’t want to have a different indoor FTP, it can be removed and all indoor rides will be updated to use the normal FTP number.

The power history chart is nicer to use. It now remembers the zoom level, so you can change the data shown on the chart without it resetting the zoom. It can also show effective power as well as average power.

There are a few little interface changes:

Finally, there are a handful of more technical changes:

That’s all for now. One thing I was hoping to have ready now was an initial release of a mobile solution. For better or for worse, everything else here came together first.