There is a concept in exercise science called physical working capacity (PWC), which refers to the amount of power that is produced at a specific heart rate. PWC130, PWC150 and PWC170 are the the power produced when the heart rate is raised to 130BPM, 150BPM and 170BPM. Ideally, these numbers are worked out by doing a specific test, but it’s also possible to work some things out by looking at power and heart rate from a normal ride.

Cycling Analytics now has a new chart that shows how heart rate and power are related. It is found on the pages for all rides that have power and heart rate data, and it looks something like: 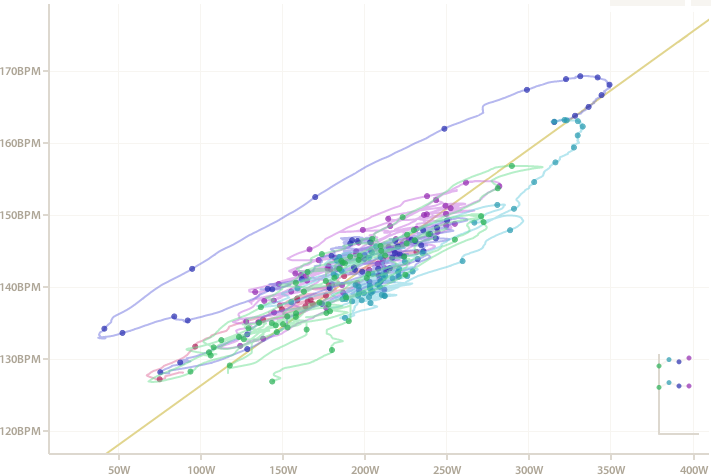 Your first impression might be “that’s a big, colourful, messy set of lines and dots”, but it does mean something. What you’re looking at is a plot of the entire ride, where the x-axis is power and the y-axis is heart rate (in Excel, it would be called an X Y scatter plot). It’s actually just one line — the line colour changes every hour — and there are dots every minute.

Therefore, in the top right of this chart, the aqua/light blue line starts going up from 280W at 150BPM (this is the climb up to Kinglake), before a slight reduction of power that doesn’t affect heart rate (five minutes later, at 164BPM and 330W). A couple of minutes later, the line then becomes dark blue (it’s the two hour mark of the ride) and sees an increase of power and heartrate (bringing power up to 350W at nearly 170BPM in four minutes), followed by another reduction in power (to 320W over three minutes). Then there’s the top of the climb and a quick reduction down to about 135BPM and 50W in about five minutes, before they both start going up again and the line disappears into the colourful mess. (It’s typical for the chart to look like this for the minutes after intense efforts, where the heart rate is a lot higher than normal for the given power output.)

If you followed that, you understand the raw data that it’s showing.

Now to step back and look at the bigger picture: notice how the entire line falls in a fairly narrow band that goes up the bottom left to the top right of the diagram? That’s because when power goes up, so does the heart rate, and when power goes down, so does the heart rate. The straight yellow line is the line of best fit for the linear relationship between heart rate and power. From this line, PWC150 and PWC170 are calculated, which in this case, are 244W and 366W. The r2 value for the line is also calculated (this indicates the statistical quality of the relationship, and higher is better). These three numbers are shown in the chart legend; here’s the chart with the legend visible: 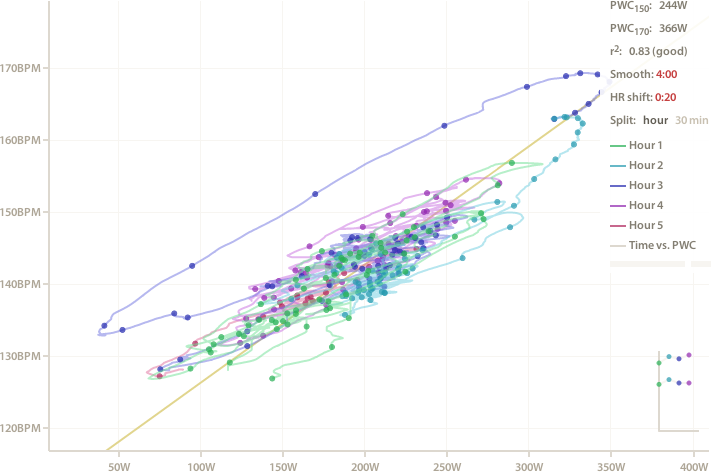 (The light grey box at the bottom of the legend can be clicked on to show or hide the legend.)

Three things can be changed here (for the numbers, click on the red bits, change them and hit enter to use the new value, or escape to cancel):

Like on other charts, the series’ names in the legend can be clicked on to hide and show data, so the data for any or all hours can be hidden if desired. On the subject of time, the time in this chart doesn’t quite match the actual ride time, because smoothing the data causes the first four minutes (if smoothing is for four minutes) to be rolled up into the first second, and long gaps are removed.

Finally, note that this chart isn’t perfect. One problem is that, in the process of trying to find a linear relationship between power and heart rate, it doesn’t properly take into account the way significant efforts affect heart rate for some time after the effort. Smoothing helps a bit with this, but going back to the example above, notice how after the climb, the heart rate is considerably higher than what it should be according to the linear relationship that’s being shown, and it remains high for about quarter of an hour.