There are far more males than females who use this site, which has meant that there hasn’t been enough data to make decent comparative statistics charts for females. Now there is, so now there is a second set of charts for females that can be found under Athlete > Statistics. 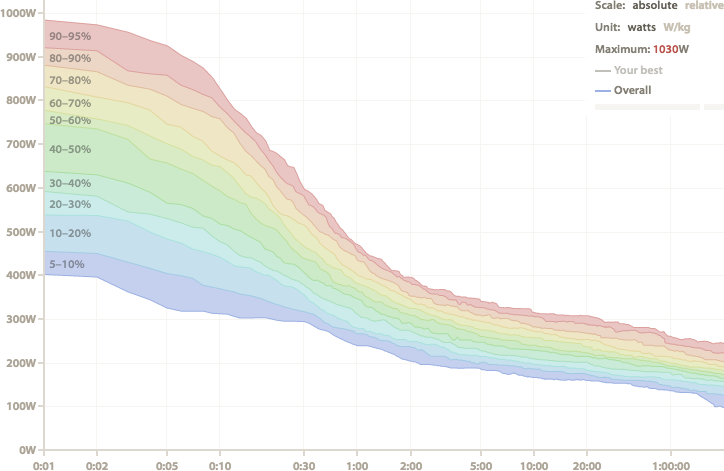 The power curve chart for females looks particularly rough because of the lower number of people it’s based on. It’s similar to what the chart for males looked like when it was first added, but it will improve over time. The top group shown on the chart is the 90–95% bracket, leaving the top 5% not shown on the chart.

There is now a new top segment on the chart for males, which shows the 98th percentile, leaving only the top 1% not shown. 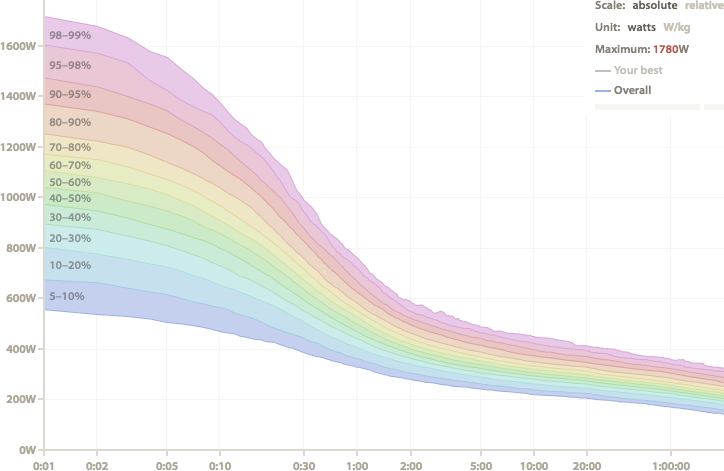 There are also charts that show histograms of self-reported resting and maximum heart rate, weight and FTP for females. It can be interesting to compare these with the equivalent charts for males. Heart rates seem to be slightly faster, weights are lower (median is 60–62.5kg vs. 75–77.5kg), and FTPs are lower. In the same way that males seem to not like admitting to an FTP of 290W (instead of 300W), females don’t like admitting to an FTP of 190W. Interestingly, FTPs as watts per a kilogram are quite similar. Males are slightly higher on average and have a longer tail at the top end, but the distribution of females is skewed more towards higher values.

The power curve is also interesting to look at. Males are much stronger when looking at absolute wattages, especially at shorter durations. The average female user of Cycling Analytics (ranked 50% on the chart) can produce 658W for five seconds (as an all-time best, based on data uploaded to this site), much less than the average male at 947W. A female ranked 95% can hit 924W for five seconds, versus 1344W for an equivalent male. The gap is closed a lot when looking at it in watts per a kilogram, especially at longer durations. The average female has produced 3.24W/kg for an hour, which is only 1.5% less than the equivalent male with 3.29W/kg. A female ranked 95% has done 4.19W/kg for an hour, 5% less than an equivalent male with 4.42W/kg.

That’s all for today. A much bigger update is coming Very Soon™. It’s been almost ready for a while now, but I keep adding new things rather than finishing off what’s almost finished.