There are two big updates today: it’s now possible for you or your coach to specify rides in advance, and all rides can be shown on a calendar instead of a list. 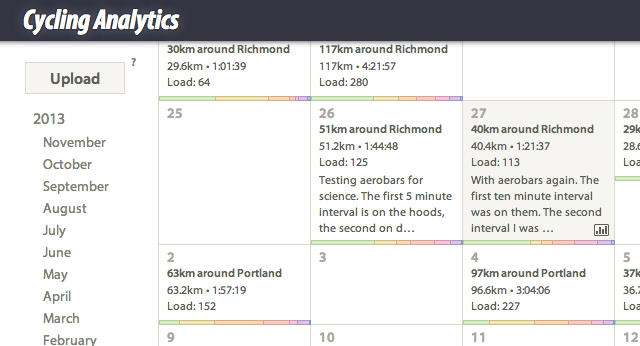 There are two ways to click on the calendar:

The ride uploading interface has been upgraded.

This was done mostly to facilitate bigger improvements on that page, but it has a lot of nice new features of its own:

All uploads are shown on the one map, and it highlights (and zoom in to) the ride when the title or description are being edited. The other button, between the “post to Facebook” button and the title, is a link to go directly to the ride. The numbers at the bottom (“4/4” and “100%”) show how many rides have completed processing, and what proportion of the data has been uploaded (there is a difference between the two).

One caveat of sharing rides to Facebook is that this is not yet using the new “fitness” Open Graph properties, so rides won’t show up on Facebook with a nice map and summary data. Yet.

The “type” of a ride refers to the category of cycling it falls under, such as road or track or cyclocross. The “purpose” refers to it being a training ride, a race, a social ride, a… continue reading

This site is not yet “done”. There is a long to-do list, and here are some of the features that are planned to be worked on in the near future.

The page that currently shows the list of rides is going to be entirely remade to be more flexible, more powerful, more useful, and overall, better. In addition to showing rides as a list as it currently does, it will also be able to show rides on a calendar, or on a searchable and sortable table.

This is a screenshot of one prototype of a calendar that is currently being experimented with. The calendar part (on the left) shows three aspects of individual rides with the number (distance), bottom bar (duration) and background colour (training load). These will be configurable, so other features of rides can be shown, such as intensity (either from power data or RPE) or whether or not it was completed according to the training plan.

The section on the right is a summary of a training cycle, in this case the week… continue reading 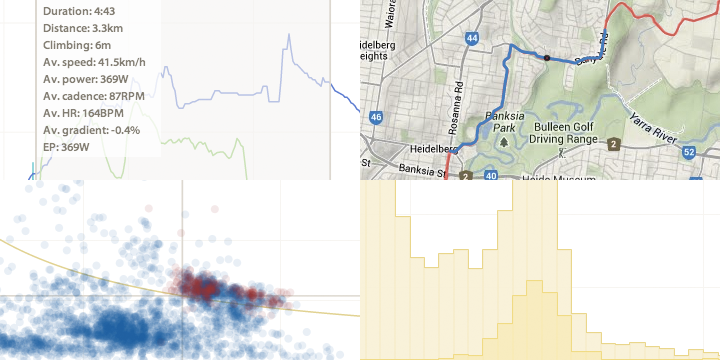 On a “ride” page, a selection can be made on the main ride chart by clicking and dragging. This shows a summary of the selection, but this “selection” is shared across the entire page and used in a number of ways:

There are also a number of ways to create a selection:

There’s a new picture of a bike on the front page, and it’s a good looking one.

This bike is Alfred Basa’a Crumpton Corsa Team with Enve 6.7 wheels. The photo is by Matt Bice. Read more about it (and see more pictures) on Cycling Tips, where it has been featured as one of the bikes of the bunch. Thanks Al!

The way ride times are calculated has changed. Previously, there was duration and riding time, where duration was the length of ride from start to finish, and riding time was the time spent moving. These have been renamed to total time and moving time, and a new value called duration has been added, which is intended to be the best approximation of the actual length of the ride. Read How everything is calculated for more details about this and the rest of the summary data.

As a result of the ride duration changes, training load and TRIMP values have changed in some cases. When they have changed, they will be a few percent higher, and this in turn affects the numbers on the training load chart.

The other change in ride summaries is that the heart rate and power zones are now displayed as a chart instead of a table. Moving the mouse over the chart shows information about each zone. 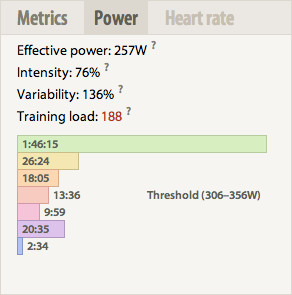 There’s lots of numbers on this site, but it’s not obvious how many of them are calculated. In fact, even the simplest ones end up being a lot less simple when you think about it. Does average power include zeros? Does average cadence? And why are there three times for the ride? Read on and be illuminated.

Cycling Analytics now has an API. This provides a programatic interface to this website, which means other websites, mobile apps etc. can read, modify and create users’ data. This has been a work in progress for some time — observant users may have noticed the link to the developer page in the footer or the “developer mode” option in profile settings in the past few months — but it’s now ready for general use. 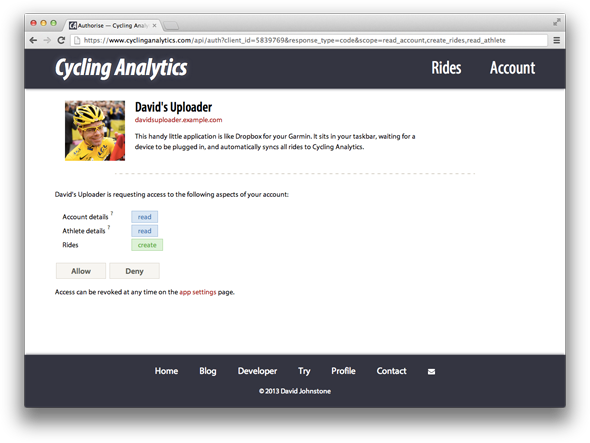 The API can be used for many things, such as mobile apps to record rides and directly upload them, websites that do novel things with ride data, scripts to automatically upload rides, and much more. The documentation is much more thorough, but here’s a few things worth noting:

The Garmin Vector is finally out, and I have one. I’ve spent about an hour riding with it so far, so I don’t have any large scale data comparisons (you’ll need to wait for DC Rainmaker’s review for that), but I do have a few thoughts. 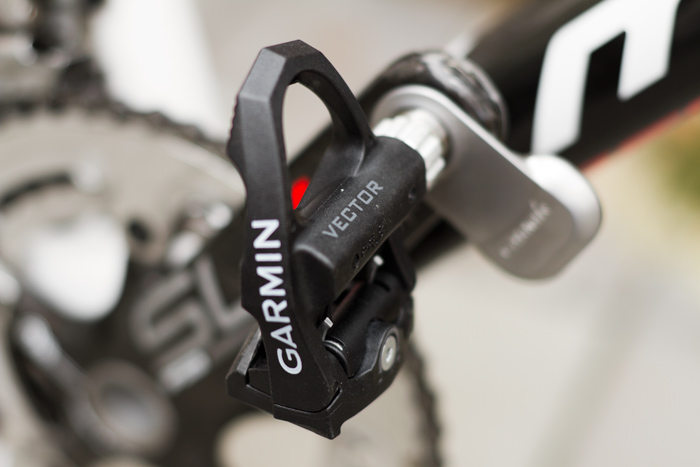 Installing it wasn’t too complicated, although I did watch a few of the videos, mostly to make sure I didn’t do anything silly, but they did explain what the washers were for (which is to create a gap between the side of the pod and the pedal).

Although my pedals came with the latest firmware, I had to use the updater to tell them that my crank length was 175mm. They default to 172.5mm, which can be changed with Garmin Edge 810 and 510 head units, but I only have a Garmin Edge 500, so I needed to install the program which connects to the Vector using the included ANT+ USB stick.

The main issue I have faced is that my FSA SL-K Light carbon cranks are right at the limit of how wide cranks can be with the pods. Apparently the Vector supports cranks up to 38mm wide and 15mm thick, and my cranks are about that wide. 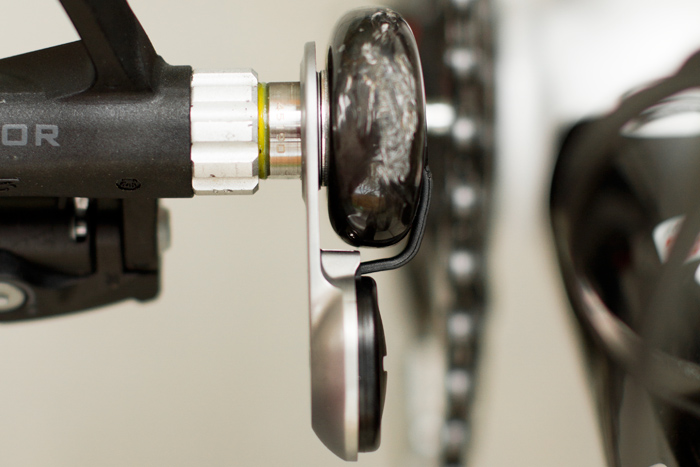 Firstly, there’s an overall left/right balance for the entire ride in the ride summary. However, it’s a bit like average power in that it means something, but there are many situations where it doesn’t say as much as it could.

Secondly, the main ride chart shows the power balance as points. You’ll first need to click “L/R balance” in the legend to make it visible. The average is also shown for selections when they are made. Note that the centre grid line is at 50%, and the percentage refers to the proportion of power coming from the left leg (so pedalling with only the left leg will result in points on the top of the chart). 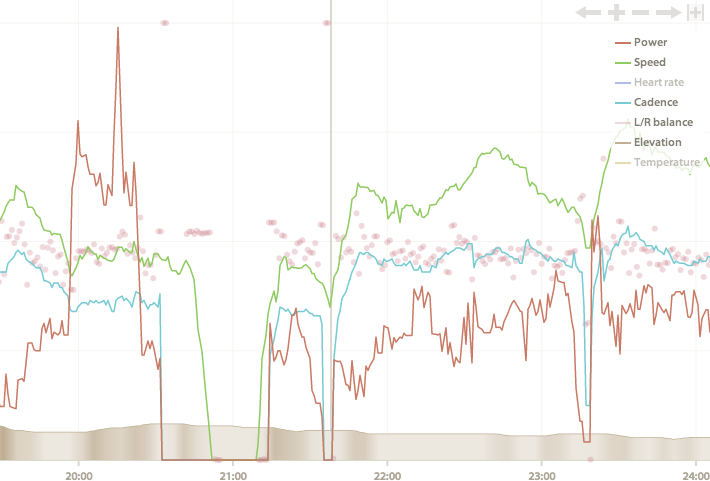 Finally, there’s a power versus left/right balance chart at the bottom of the page. This is an x-y scatter plot that shows the power and power balance for each second of the ride. This is useful as it gives a better understanding of what your power balance looks like. 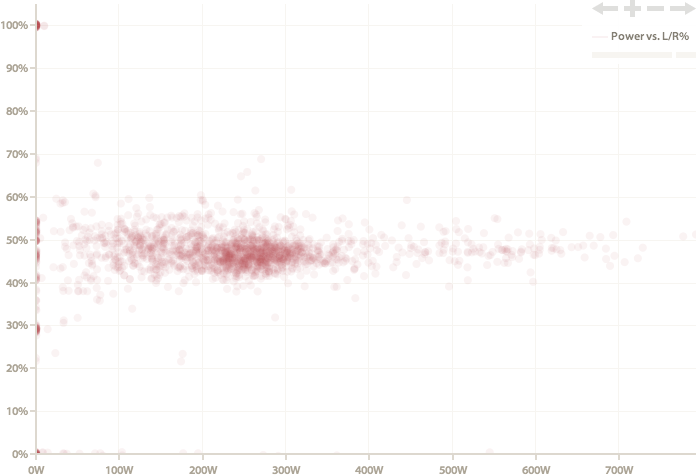